Today is the launch of my whole new world! Okay, the book isn't ready yet--it's still being beaten into submission--but the COVER is up and she is FIERCE!!

Before us is the awesome book cover designed by the magically gifted Aleta Rafton for the first book in The Asarlai Wars trilogy- I give to you the WARRIOR WENCH! *guns are fired, confetti floats about, cheers fill the air* 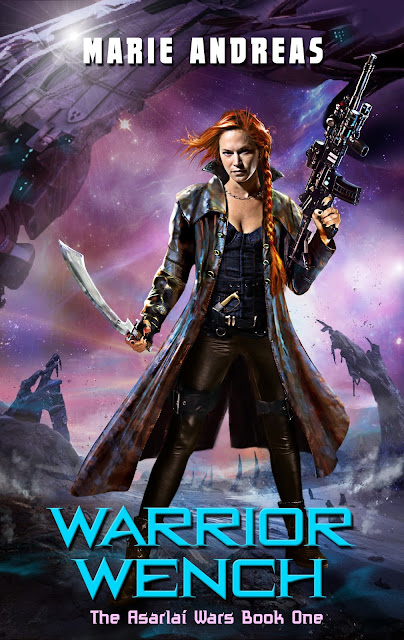 Vaslisha Tor Dain is a mercenary starship captain with a few simple rules: A good ship is better than a great man, in case of confusion always err on the side of blowing someone's head off, and never fall for a telepath or a member of her crew.

All of those are about to bite her in the ass.

Vas’s life takes a turn for the worse when she comes back to her crew after what should have been a two week pleasure trip to find out she’s actually been gone a month and has no memory of missing time. Her beloved ship, The Victorious Dead, has been sold for scrap and its pieces scattered throughout the galaxy. Plus, there are unmarked ships blowing apart entire planets and the Commonwealth government can’t, or won’t, stop them.

And that’s just her first day back.

Vas has to fight her crew, the Commonwealth, and a mysterious cadre of warrior monks to get her ship back and save a universe that may not want to be saved.