Is it done yet?

Today I’d like to talk about knowing when your book is done, as in ready to go forth and terrorize agents and editors in the outside world. These erstwhile folks all say the same thing- don’t send them your work until it’s done. But how can we tell when that is?

The trick is to get it as polished as can be, but still feeling, sounding, and acting like YOUR book.

This came to me today while I was nuking my oatmeal (yes, I lead an exciting culinary life- I do add a ton of cinnamon though ;)). If you under-cook your oatmeal, it doesn’t taste right, and the texture just isn’t done. Yet if you over-cook the stuff, it becomes a giant blob of blech that over flows in your microwave.

Authors can have both problems:

1) Sending manuscripts out without proper “cooking”. Often seen with first books, this is also the result of no cooling off period. We’ve all been there. We rush through a book or project (seen it happen with short stories too) and are so excited about it, we jump right into editing, then send it off the instant we can.

We need time to step back and ignore our baby. Push it out of sight for a few weeks (or even months) before we go through that first essential edit. I’d argue that at least one more cooling off period would be a good idea to gain distance after we’re SURE it’s ready, when we’ve edited until we feel we can edit no more. Give it a few weeks, then check one last time ;).

It’s also good to get it in front of an extra pair of eyes, although there are some pubbed authors who don’t use a beta (aside from their agent ;)) and that works for them. Most of us really do better by having one or more trusted readers plow through things. If even just to catch the “stupids”, those little errors we all make and that our eyes somehow miss no matter how many times we read it.

2) Over-cooking. This can happen when someone has perhaps too many “extra-eyes”, or doesn’t have enough sense of their own voice to know when a comment shouldn’t be followed. It can cause the story to lose the “you” in it, to become watered down to the point where it’s not interesting to anyone.

It can also happen if someone over edits (and I know there are some of you out there screaming, “not possible!” but it can, and has, been done). Part of what we do as authors is take chances. We take a chance that our skill and drive is enough to make our dreams come true. But that takes a lot of faith too, in ourselves. If an author lacks that faith, they may edit their book to death.

I have three books that are “done”, yet like most writers I can’t stop poking at them. There is always something to change, fix, fiddle with. And ya know what? There always will be. At some point you just have to tell yourself, you’ve done all that you can. You’ve finished the book, let it cool off (while you work on a NEW project) then edited like a fiend, let some trusted folks read it, take in what YOU believe works from their comments, let things cool again- then taken that final look. THEN, knowing you’ve done all you can, you hit the submissions’ circuit with pride (you DID research all of your agents, right?!). Then get back to that next book!

What about you- are you an over cooker, or under cooker? ;)
Posted by Marie Andreas at 3:00 AM 16 comments:

Why you can never fail as a writer

We are all apprentices in a craft where no one ever becomes a master. ~ Ernest Hemingway

You can't fail, you can only quit- Richard Manning


Today you get two quotes for the price of one! Both of these really speak to some important facts we as writers need to remember.

1) You are NEVER going to be done learning and polishing your craft. Not gonna happen. Even writers with dozens of books are (or should be) continuing to grow and learn. Yes, there are ones who are just “calling in” their books. Their pubs know that the public will buy anything they produce, so they don’t care. But we’re ignoring them for now, because I know none of you intend to be “those types of writers”. Therefore, the learning process never ends. There’s no final. No thesis. No dissertation.

2) If you are never done learning, then you are always a work in progress. And you can’t fail. You can only fail if the process you are attempting actually has a termination point. Now, you can be ornery and create your own deadline, “if I’m not published in two years, I’m giving up!” But why would you want to do that? Is it some perverse sense of taunting the Universe? “I’ll show you! I’ll quit!” And who does that hurt? Not the Universe, it really doesn’t care. It only hurts the writer, if you love something enough to invest two years of sweat and headaches – why would you be willing to walk away? So the self-imposed deadline is a bit foolish. Either you’re a writer (aka someone who loves to write) or you’re not. If you can even think of a self-imposed deadline, you need to ask yourself why. It’s tough love, but I’ve seen many words of advice where people in this business (writers, editors, and agents) point out, if you can think of quitting, maybe this isn’t for you.

So, excluding the self-imposed deadline- we as writers have none. There is no rule that we must be published by a certain date. Or in a certain form. Our only rule is that we write.

No deadline, no termination = no failure. You can’t fail if you are still trying.

Jan 12--I just want to thank everyone who commented, or tried to- blogger is having issues and is blocking comments- including mine! But thank you all!
Posted by Marie Andreas at 6:25 AM 10 comments: 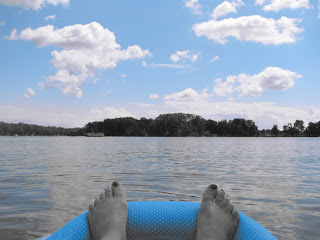 First blog of the new year! And I wanna talk about taking downtime...but not for me ;).

Everyone needs downtime, even characters. Unfortunately, some writers fail to realize that and run their characters from dusk to dawn at full speed. I’m not a reader (nor writer) who needs to know about bathroom/showering/eating/etc breaks unless there is something there to move the story forward-but I do enjoy character down time.

I read to hang out with some like able characters while they go on some adventure. I like action, but I since I also like the characters (or that book gets put down, donated, or thrown against the wall) I want to spend more time with them. I treasure those little moments in books where the characters get to relax, interact with friends or family- the calm on the roller coaster ride.

That’s how I see good books- they take me on a ride. There are highs (lots of adventure, action, emotions) and lows (lulls, moments of down time). If it’s all lulls= dull; all action = out of breath, no mental processing time. And less connecting with the characters.

This is far more common in Urban Fantasy and its close relatives. The quips are flying, so are the bullets, spells, and or blades- yet there is no break. Not all UF is like this by a long shot, there are some great authors out there who give respites, but still keep things turned on high enough to keep readers blazing along.

When I read the other books, the ones with no break in the action, I feel as if there is a breathless person standing in front of me, trying to tell me a month’s worth of detail in twenty minutes. It’s akin to a whole mess of run on sentences. Even though the author most likely didn’t write them, they have conceptually done so (maybe there should be something called a run-on book ;)).

The really good authors have downtime, their book reads like the best roller coaster around. They give the reader time to see another side of the character, to relax a bit before the next round.

I think some authors are afraid that downtime means dead time and that without the hooks a flyin’ their readers will wander off. As writers we are constantly being told to put emphasis in the hook, it’s akin to a death sentence if you don’t have hooks all the time.

I would argue that good downtime is not only a relief for your readers, but if done right will make a stronger connection between the reader and the characters AND even keep moving the story forward!

When slipping in some downtime, we need to make sure that even though it’s not the “all hands on deck” situation, we are still working in information that will move the story forward, even if at a slower pace.

As a reader, it’s what I feel makes a great book. As a writer, it’s what I try to make sure I have. Let readers take a breath with your characters- you’ll be surprised the difference it makes.
Posted by Marie Andreas at 5:00 AM 9 comments: