#IWSG- Which path and the end of a series

It's another day in the Insecure Writer's Support Group collective!  Join us! 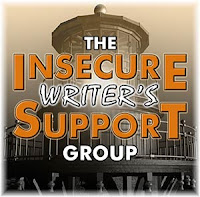 The first part of today's blog is about ending a series. For those of you who don't know, I'm a fantasy/SF author-- the folks who LOVE series ;). I tried writing a single title book once and about half way through realized there was no way that was going to happen.

I'm now in the edits for the third book in my space opera trilogy. AKA--I'm finishing something. One advantage of a series is that you always have another book down the line after the one you're working on. Since my series are really a single story just broken up into smaller bits, that means I never have to say good bye. Now I have to say goodbye.

This story was envisioned as a trilogy from the beginning, I knew where it was going to end, and it felt right. But it was also hard as heck. However, even while writing it, I knew that wasn't the end for these characters. I wasn't sure what would be next, but no way was I letting them go completely. I'm a pantser, so I write with a lot of surprises (for me ;)). As the final book was unfolding, I suddenly knew where the next series would be going.

Knowing there was something else did help end it. I'm still sad, this is the first time I've ended something-LOL. But I'm already making plans for the next series for these folks--after a year off for other books ;).

The second part of today is a question from the IWSG--which publishing path and why? I sort of touched on this last month, but in case you didn't notice--I'm Indie ;). Now, I grew up as a young writer with stars in my eyes and a traditional path firmly set in mind. That was the only option back in the olden days ;). But, after one too many, "We love this BUT...."(all centered around my stuff not fitting the current market), I took the plunge and went Indie. I gave myself a year to plan, research, etc. I found a cover artist, editors, kind friends who would beta read, formatters--etc. Then in March 2015, I dove in.

I love the freedom! I love being in control of my writing destiny. I love that my books are being read. But Indie is really hard work, all writing is, but Indie adds layers trads don't deal with. I do now have an agent, so who knows what the future will bring. But, I love that I chose this path.