Your character sits on a throne of lies!

Yup, you have been lied to by a character. Most likely more than one. Probably whole slews of them.

Now, to be fair, they most likely didn’t mean to lie, unless of course they were a Big Bad, in which case that’s sort of their job. But for the rest of them?  They were telling the truth—as they saw it.

Writers control what the reader sees by choosing a point of view character (or characters ;)) and the type of POV. Traditional third person gives the reader access to an over-view of the situation, and a far more global idea of what’s going on, but it can also put more distance between the reader and the character.  First person resolves the distance issue—you are RIGHT in their head after all—but does severely limit what the reader can see.

I write both types of POV depending on the story. The Lost Ancients series is first person, my other books, including The Warrior Wench space opera that will be out in 2016, are all third person.  I have tried switching POV, for both The Glass Gargoyle (going from first to third) and in The Warrior Wench (third to first) and both attempts were awful. Neither of them worked in the other format. Sometimes a story needs to have a certain feel to really be its best. Sometimes you need more lying going on.

Now, like the characters, an author isn’t really lying per se…okay, we are, but like the Big Bads it’s sort of our job. But for some stories, having that broad, overarching feel of a third person POV just doesn’t work.  We need some missing information, or misunderstood information, or just plain lies. We need an unreliable narrator.

Taryn doesn’t mean to lie, in her head, she’s not lying to anyone—except maybe a few tiny white lies.  But the fact is that we are in her head. We only see what she sees. Most importantly we only see things how she sees them.

She is, by definition, an unreliable narrator. This isn’t just true for her, pick up any first person book, and you’ll find the same issue going on. How you see an event will be different from how I see an event—even if we are standing right next to each other. So, your story would be different than my story.

Like all of us, whether we be living people, or figments of someone’s imagination, we don’t always see things how they are. A person’s past, or their perception of that past, is going to make a huge impact on their reactions to, and perceptions of, their current situation. And characters are people, right? They don't mean to sit on a throne of lies--they just end up that way ;).

So what about you and your favorite fictional characters?  Are they lying to you?  Did they do it well?

Well, I survived Comic-Con International, but got the con crud- hence no post last week ;).

At the con, I did see a few TV show pilots.  One, Lucifer, will be out in January (I think) and was awesome.  Grabbed your attention, and if they play their cards right, they could really build some depth in.

The other, here on out known as "show two" didn't grab me at all, and the why's of it can be seen in novels as well as TV scripts.

Show two gave too much information at once- they literally dumped a couple eps worth of backstory into that one 45 minute chunk.  Info dump, thy name is "Show Two".

One of the dump issues was that they would have a scene just for the sole purpose of building backstory.  There was a murder-with the sole purpose, really, of showing us, "wow- there are people with distorted body parts!" (it's a space show folks ;)). Also, "Wow!  The jaded detective from the planet they are on is stuck with a wet behind the ears earther!"

There's nothing wrong with giving us that, but it could have easily been worked into something that was story related.  I guess the murder wasn't important because it's dropped a scene later.

Then our detective gets a new case, a missing debutante. So he goes talk to a woman in a bar to get some insight.  Do we get anything that will help him?  No, we simply find out that a) the two were an item previously, b) she herself was a runaway debutante. SHE gave him no help!

There were a few more, where information (backstory) was dumped on us, without any real information to propel the story forward. It would have been so much better to weave the backstory into the actual plot.

As writers, we want to tell our readers EVERYTHING at once.  But weaving backstory in, letting it move the plot forward, is going to work much better, be less intrusive, and actually gives more information to the reader.
Posted by Marie Andreas at 7:30 AM 4 comments:

Happy Wednesday!  Today I have escaped from the day job and will be picking up my badge for the most massive, crazy, creative powerhouse in the world- the one, the ONLY Comic-Con International San Diego! *cues thousands of screaming fans here*

I've been going to this event for over 20 years- and yes, as folks like to point out, it has changed radically in that time.

When I first started, only part of the current location was up and being used- the rest was still being built.  You could walk up and buy tickets the day of the event.  When my friends and I would hunt down the "next year's badges" booth in the front lobby they would jump for joy because they were kinda bored.  I volunteered a few times and one of the times I was badge stuffing- yup, they used to mail out badges to people. Big actors usually didn't make it down here- there were always rumors then at the panel the "they're stuck in traffic" would be announced.

Now, there are over 130,000 attendees, and tickets sell out in record time.  People get in line for panels DAYS in advance. I no longer go to the "big" rooms. Major "A-List" actors are standard fare.

And I still love it.

Part of that love is simply nostalgia.  I have so many memories of previous years- going with groups of my friends where we'd meet up for giant breakfasts then dinners of over 30 folks.  Friends who are no longer with us, and those who have drifted away.

But there is also an energy, a creative vortex of sorts, that can't be ignored. There are novelists, comic writers, screen writers, artists, inkers, musicians, film makers, actors, collectors, and cosplayers- aka- pretty much every strata of the creative world is there in one form or another.

That energy just hits you like a wave. These people are doing what they love, whether they be creator/fans or just fans - they are following their bliss.  I LOVE seeing the vendor floor. I LOVE going to the panels, I do smaller ones now, but there have been some great ones in those smaller rooms.  But what I love the most, is that energy. As a creative person, being around that kind of force is extremely powerful.  It recharges my creative self, and shoves me forward.

So, for a few days, I get to live in an insane, creative place, where everyone around me is just as crazy as I am :).  Follow your bliss out there, folks, even if that bliss is a geek-fest with 129,999 of your closest friends ;).
Posted by Marie Andreas at 7:05 AM 5 comments: 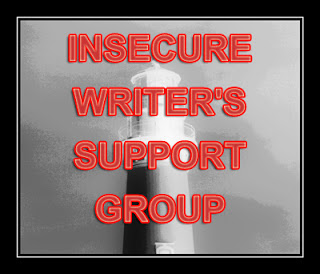 Welcome to another episode of How the Writer Turns, aka- The Insecure Writer's Support Group.  Once a month, writers from across the globe join forces to shout into the ether our hopes, dreams, and just whatever comes to mind (we're writers after all ;)).

Today isn't really about anything I'm feeling insecure about.  I think insecurity is becoming such a regular state of mind I'm beginning to ignore it (folks ask me what my sales are and I just smile, shrug, and say "don't know!"- it's keeping me sane ;)).

So today I wanted to talk about triggers.  A few weeks ago I posted about where ideas come from. This is sort of an example of how those ideas become a major part of a story (plotters--you may want to stop reading now, this could hurt ;)).

I'm very mentally influenced by music as most folks are.  For writing I like listening to various movie trailer CD's. Not specific movies, just mostly random collections.  There was one that triggered a full battle scene in my space opera world.

A convent of military nuns, fighting for their lives.

My main character in that series, Vaslisha, had some tie to them, but I wasn't sure what. The song just totally captured the entire scene (don't ask me the song-LOL-it's on a blank labelled CD!). The fighting was there, the fear, the hopelessness.  The pain Vas felt while seeing it happen.

I made notes to add the scene to the second book (book one is in edits for a release sometime in 2016 ;)) and moved on.  Then another song, very similar to the first, just recently made another trigger.  That Vas's connection to these nuns was an important part of her past and a whole bunch of ways for it to be worked into book one (yes, the completed book one) slammed into my brain space.

I now have another aspect to weave into my story, a major plot point for book two, and ways to make book one even more powerful--all because of a few songs.

So keep paying attention and let your mind roam when you listen to music, you never know where it will lead you!

What have been some triggers for your writing?