"Impostor syndrome (also known as impostor phenomenon or fraud syndrome or the impostor experience) is a concept describing individuals who are marked by an inability to internalize their accomplishments and a persistent fear of being exposed as a "fraud"."

The feeling of, “I’m a fake, and when people find out they will yell at me, mock me, tar & feather me, etc” can hit anyone in any field. It does however seem to be extremely common with writers.

Let’s start in the beginning. All writers start as readers. As readers we look up to those magic and amazing folks who create entire worlds out of thin air—worlds and people that can be as important as the real world to a fan.

Somewhere along the way, we get this idea that maybe WE could write a story. It doesn’t have to be big, or grand. Heck we won’t even tell anyone we’re doing it—what harm can it do? We’re not like REAL writers, right?

Then we start getting feedback, we’re showing our baby around—some folks love it and some folks hate it. But we’re just showing folks—no harm—and we’re still not a real writer after all.

That’s where this insidious imposter feeling starts. Those magic people who write the stories we love have some secret mojo that mere mortals like us could never have. Then the feeling of being “not a real writer” grows when we’re told we’re not real because we write in “XYZ genre”, and no “REAL writers write that drivel”. Or we’re not a real writer because we chose an alternative path to publication, “Well, you know self-published people are not real authors, right?”

If you write- you are a writer. You have every right to call yourself one and keep your head high. Not published yet? Still a writer- you’re working on publication. Indie? Still a freaking writer. Yes, some writers throw stuff up without even a second read, let alone beta readers and editors, but you’re not like that. Keep your head high.

Now dig deep, focus your fierceness, and remind yourself you are YOU. There’s no impersonating going on.

Planning on going to a convention?

Ahhh-fall. The time when many writer/reader conventions come into bloom!

These events are wonderful for authors to gain insight to their craft, meet cohorts in the writing journey, and meet fans (or future fans ;)).

Just doing a Google search will bring up tons of these events and which one you go to depends on many variables--so you all go check them out on your own ;).

But here are some ideas for what to look for when picking one out:

Distance: how far are you willing to go? Does the city have other things you'd like to tag on as a vacation? Is it easy to get into? (I had a 45 minute cab ride to and from the airport for an event earlier this year--NOT fun, nor cheap). Look for travel deals​ for Las Vegas, or whatever city you're going to. Most cities will have many sites and options.

What is the make up?: If you're a writer, are you looking to mingle with readers? Want some craft and business workshops? Network with the high and mighty in the publishing world? If you're going as a reader--do they have parties with lots of authors? Panels discussing aspect of books you love? Plenty of wonderful authors to mingle with?

Cost: This is where it gets messy kids. Most of these events aren't cheap. But they have some amazing experiences for attendees, so plan for the cost. Share rooms, drive it you can, whatever.

How to prepare once you've picked one:

Plan to wear comfortable shoes! You might think you'll be inside all day--which could be true, but might not be the case. Even if you are inside, some hotels are HUGE! I've done two events at the Rio in Las Vegas--mega walking and you never go outside!

Pack pens, notebooks, your cards. Writers- you need to be ready to hand out cards, bookmarks, whatever from the time you get there. Even readers--if you have personal cards and want to give your favorite writer something, drop your card in with what you're bringing. Plus, some events do giveaways, so little things with your name and email are dang handy.

Plan who you'll see: If you've got some favorite authors attending, bring things for them to sign (and buy a book or two ;)). Read everything in ebook? No worries- make a scrap book of print outs of the authors' covers you want to see. Have them sign their page. You end up with an awesome keepsake.

Be social! Okay, this one can be hard for everyone. But writers can be very reclusive. So, if you're an author, practice smiling at folks. Nothing more--just smile. And readers, if your favorite author is looking lost--share a smile with them--they are more scared of you than you are of them!

There's an event coming up in Las Vegas, Love N. Vegas (no, I'm not going to be there- but a heck of a lot of authors are!) and the fine folks at www.vegas.com would love to help you get ready to go.
Posted by Marie Andreas at 12:30 AM 2 comments:

#IWSG Surprise! You're a (published) writer!!

Welcome to another chapter of how the pages turn....oops. Another chapter of the famous, Insecure Writers Support Group! (let ya in on a secret--most all writers are insecure, so if you are one, and you haven't joined us--do so now!) 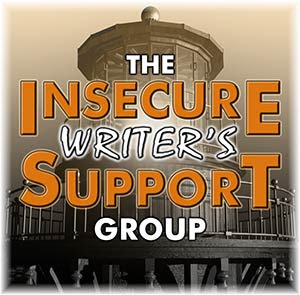 The wonderful folks behind this global event, offer a question that can be addressed each month in our blogs--today's was if we had surprised ourselves with our writing at any time.

IF? Every single time I write I am surprised by something. Now granted, sometimes it's a "who wrote this crap?!" thought. But many times it's more of a shock at what I have created.

I have a mini book empire!

Now the fact that I write isn't a shock. I've done it off and on for as long as I can recall. But the fact that I went forward when editors and agents were finally saying, "love this" but it was followed by the, "But I have too many of this sub-genre", or "Humorous fantasy isn't selling to NY right now".  I went forward and shoved my babies out into the wild anyway.

Now self-publishing isn't for the weak at heart. You have to know what you can do, and what you can't. I hire professional editors, an amazing cover artist, and a formatter.

But my books are out there.

Three have been "Top Picks" from RT Book Reviews.

I've had all four of the fantasy books in the top twenty for their category at the same time.

Can I quit my day job? No. Am I a household name and auto buy for millions of readers? No.

So, my biggest surprise about writing, is just that, writing. The stories are a surprise, my path as a published author is a surprise. Everything.

Happy IWSG day and may all your surprises be good ones!
Posted by Marie Andreas at 7:10 AM 26 comments: